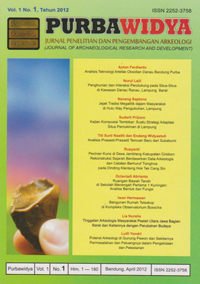 AbstractThe underground chamber as a recent of archaeological remain in West Java was found al SMPNI Kuningan. It occurred when workers digs foun­dation for the new teacher lounge and they accidentally found concrete struc­ture, after they breached the concrete they found a chamber big enough for a man to stand in, and also the other rooms in the chamber. The finding then was reported to BP3 Serang which then sun'eyed it and recommending Balar Band­ung to carryout archaeological research.The paper tries to elaborate about the shape and function of the find. To know its dimension, material, and construction of the chamber as well as what it func­tions when it was used in the last time. Based on data found at the research it's inferential that the underground chamber builds around 1918 when the school was used as HIS.Kata kunci: Kuningan, SMPN 1 Kuningan, ruang bawah tanah, peturasan, septic tank