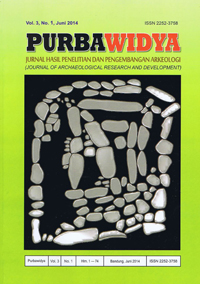 AbstractThe purpose of this paper is to reveal the past culture of Luragung through the form of tombstones and grave decorations on ancient tombs in the region. The data is obtained based on the results of research on the ancient tombs of Islam in the Luragung region, Kuningan regency, West Java province in 2013 with a survey method that is equipped with literature studies and interviews. From the analysis that has been done, the shapes of the tomb and headstone and gravestone decoration in Luragung from the initial touch of Islam to the development of Islam had experienced cultural development. The shapes of the tomb and headstone and gravestone decoration are adapting the local architectural values that have been there before, and received cultural influences from outside. Based on this, it can be concluded that the past culture of the Luragung people has developed and been developing. One of the factors that affects the developed and developing culture of Luragung people is in line with the entry of the spreading of Islam by leaders and scholars who come from Cirebon, Banten, Demak, and Mataram to the region. Keywords: structures, tombs, gravestone, decorative