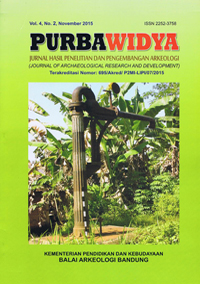 Abstract The mapping of the existing ancient terrace of Bengawan Solo (Bengawan means big river) is the preliminary geo-archaeological research conducted in several sites in  Bojonegoro region of East Java. The subject found in these ancient terraces were the findings of several Paleolithic tools and vertebrate fossils. Therefore, the aim of the study was to find out the extension of the terrace and to provide a guidance for archaeologists in searching the remains of ancient human culture such as Paleolithic tools and vertebrate fossils. On behalf of the study, firstly the geological mapping was conducted in the studied area and were also to describe the sediment profile and to collect sediment samples (including vertebrate fossils) and also for sedimentary and chemical analysis. In the area studied there were three ancient terraces which were known as,  Menden, Jipangulu and Ngandong. Menden terrace (sub-Recent) was exposed at Payaman, Jipangulu terrace (Early Holocene) in Prangi and Wotangare, and Ngandong terrace at Prangi and Kedung village (Solo valley). In the context of stratigraphy, the whole ancient terraces were composed of gravel and coarse sand in the lower part to sandy clay in the upper part. This indicated that the whole terraces were formed by the meandering river of ancient Bengawan Solo. The position of those ancient terraces were relative to the position of recent Bengawan Solo is 2-3 m (Menden terrace), 5-7 m (Jipangulu terrace) and more than 8 m in length (Ngandong terrace). Based on this study, the archaeologists should focus on the gravel to coarse sedimentary strata of the quaternary fluvial system on behalf of searching the cultural artifact of paleolithic including the fossilized remains of human and other quaternary vertebrates within the ancient terrace of Bengawan Solo.